Stuart Eydmann’s fascinating blog post about the early Scottish fiddler, Patie Birnie, reminded me of a project I’ve had on the back-burner since visiting Amsterdam in January concerning depictions of folk-fiddlers in paintings by artists from the Dutch Golden Age. The image of the fiddler was evidently a popular theme among seventeenth-century Dutch artists, with a profusion of examples by the like of Rembrandt, Dusart, Steen, Molenaer, and Vermeer, to name just five. Indeed, there is a webpage dedicated to Vermeer and the fiddle at essentialvermeer.com.

My primary interest in this ouevre is that these seventeenth-century paintings may prove useful in my study of Scottish fiddle performing practices, of which precious little is known before the eighteenth century. The fiddle, with its close association with dancing, was not a popular instrument in seventeenth-century Scotland, at least according to the prevailing narrative. The influence of the Kirk was certainly strong, but our knowledge of the likes of Birnie and MacPherson (admittedly late seventeenth-century fiddlers) suggests that the fiddle was played in spite of Protestant protestations. Only in the eighteenth century did the fiddle (and dancing) become officially acceptable in Scotland.

Accordingly, as iconographic evidence, these seventeenth-century depictions reveal a lot about how early fiddlers held the instrument and the contexts in which they performed. Despite being evidence of Dutch rather than Scottish practice, they can, with due care and caution, be interpreted to reveal the way Scottish fiddlers might have played the instrument. The popularity of Dutch Universities among Scottish students in the late seventeenth and eighteenth centuries is well documented, and demonstrates the potential for cultural exchange.

The above example by Molenaer features not one but two fiddlers (one to the right and one in the distance) and reveals not only how the instrument was held but the contexts in which the music was performed. The relaxed posture of the fiddler on the right highlights how comparatively limited his left-hand technique must have been (in comparison to the modern hold which allows for high position work), and while the fiddler in the distance is playing for dancing, the fiddler on the right appears to be playing mostly for his own satisfaction and the pleasure of those nearby who are listening (either intently or distractedly). The combination of humble dwellings and social ease presents the happy peasant in a non-urban setting, yet still some way from the sentimental rural idyll.

This depiction of a blind fiddler by Rembrandt is roughly contemporary with the Molenaer, and shows a left-handed fiddler who performed in return for payment. The man in the background at the left-hand-side probably accompanied the fiddler, and is seen approaching a dwelling to request that the fiddler play for those inside.

This example by Jan Steen from the mid-century depicts a village dance, on perhaps what was a festival day (the man being lead away on the left-hand-side looks to be inebriated, suggesting a day of excess). The fiddler is to be found resting his back against the tree, playing for dancing along with a piper. The detail is poorer in this painting, but it is still possible to discern the same low arm or chest hold familiar from the preceding paintings. 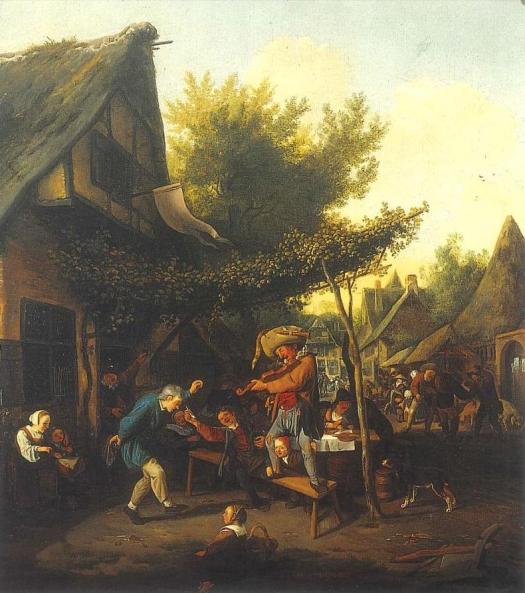 From towards the end of the century, this depiction by Dusart features the most animated fiddler of those surveyed here. Again playing for dancing, his upright stance and bowed legs portray an engagement with the music he performs. It is possible that he and the man dancing form a double-act, with performances rewarded by the gift of food, drink, accommodation, or money. While when standing, the fiddler more closely resembles a modern performer, the instrument is still far from being held under the chin.

The final painting I want to mention is from much later (early nineteenth century) and shows a fiddler playing at what is possibly a Dutch penny wedding. Surprisingly, the fiddle is still held across the arm rather than firmly under the chin, and the accompaniment of triangle is novel to me!

Of course, I am not an art historian, and I am certain there is much more that could be decoded from these paintings. Similarly, my search for works was limited to the postcard collections of the various gallery gift shops I visited whilst in Amsterdam. None the less, I do believe that these paintings give a valuable insight into the technique of folk-fiddlers (performers of dance music) in the seventeenth century.

Only later did it strike me that I don’t know any Dutch fiddle tunes. Yet, from the evidence of these artefacts, it’s abundantly clear that the Netherlands was once home to a vibrant fiddle tradition (my apologies if it still is!). More surprisingly, a quick search on goolge revealed nothing in English about the topic (again, my apologies if there is a profusion of literature in Dutch). There’s a nice little research project in here somewhere…

As a performer of Scottish traditional music on the violin, I’ve experienced many if not all of the possible puns on playing the fiddle and being a fiddler: from the various and generally light-hearted sexual innuendos and claims of financial misconduct associated with ‘fiddling’ to the more prejudicial assertions of dilettantism, a lack of respectability, and incompetence, not a performance goes by without someone exercising their wit on the topic.

It’s made me quite self-conscious as a writer on fiddle music and fiddlers, keen, as I am, to highlight the technical demands of the tunes and the genius of their composers. It seems there will always be a significant minority of my audience too narrow-minded to see beyond the caricature of the fiddler as some country bumpkin scraping away unmercilessly on his guts.

I’ve detected a similar neurosis in writers on the music throughout history. Biographers of William Marshall were at pains to brand him a composer first and foremost, and Farmer, in A History of Music in Scotland, discusses composers of dance music. Similarly, Collinson, in The Traditional and National Music of Scotland, invents the label, fiddler-composer, and Johnson, in Music and Society in Lowland Scotland in the Eighteenth Century, is at pains to redeem the ‘folk fiddler’ as a classical musician.

In a survey of nineteenth-century newspaper articles, I was surprised to find little mention of ‘fiddlers’. Rather, performers of Scottish traditional music were known as ‘reel and strathspey players’ or ‘Scottish violinists’. The one reference I have found to fiddlers is made in the context of parody:

… a selection of Scotch reels and strathspeys by the band of Scottish violinists, or rather in broad Scotch ‘fiddlers’ [Caledonian Mercury, 16th Dec. 1856]

Significantly, this quote demonstrates that the term fiddler must have been used colloquially, and it is the case that the instrument is regularly referred to in print as a fiddle, but not its player. Victorian respectabilities were highly incensed by allusions to fiddlers and fiddling, and it is the vestige of this attitude that inspires the puns of today.

View this document on Scribd

James Scott Skinner’s collection of tunes from c. 1900, The Scottish Violinist, is interesting in this respect, as by title alone it elevates the status of the music from folk (dance) music to classical (violin) music. His attempt to ‘classicize’ fiddle music was short-lived, but the same attitudes of respectability are reflected in the subsequent titling of the music, which continued well into the twentieth century to be labelled as Scottish Dance Music rather than Scottish Fiddle Music. Indeed, it wasn’t until 1979 that a volume of tunes was published as such, being James Hunter’s The Fiddle Music of Scotland, with the influence of the post-war British folk music revival being easily detectable in this change of attitude towards the repertoire. 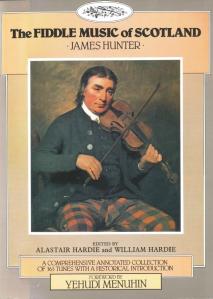 For my own part, I like the idea of the Scottish violinist: like me, so many people in Scotland play both classical and traditional music on the violin, making the category helpful for describing this particular phenomenon, at least. Nonetheless, there are those, and have been those, who play traditional music exclusively, and what’s more they play it by ear and are not necessarily musically literate. Yet I hesitate to label these players fiddlers on account of the pejorative connotations the word has. It is players such as these that have been maligned by the received history of Scottish fiddle music, focused as it is on Great Men and the collections of tunes they published in music notation.

MacDonald and Cooke have argued for the non-literate fiddle players of Strathspey and Shetland being valued for the alternative perspective they give to the music. While their performances are not as ‘polished’ as those by highly trained literate players, they often retain a rhythmic impetus more closely related to the original dance function that is missing from many modern concert-style performances. This unknown reel performed by Andrew Poleson from the Shetland Isle of Whalsay demonstrates this point well. More so, the two authors have also argued that non-literate modes of transmission retain more of an historical style of performance, but I have my reservations about this.

Ultimately, there is no quick-fix solution to the terminology we use in referring to Scottish fiddle music. While there are those of us dedicated to elevating the genre, notions of fiddlers and fiddling are perhaps too deeply ingrained in our culture to ever be transcended. However, there is hope: we’ve thankfully come a long way since the seventeenth and eighteenth centuries when the ‘Scotch fiddle’ was synonymous with scabies!